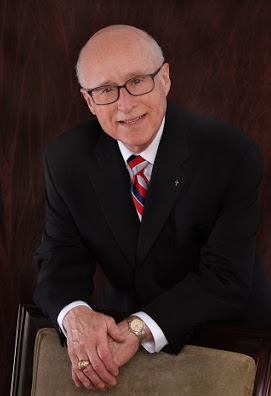 Woody Schober is the retired Director of Performing Arts for the Irving Independent School District. A former band and choral director, Schober has conducted instrumental and vocal organizations and has served as a teacher and music administrator for the past fifty-one years. He is founder and past director of the Irving Boys Choir. In addition, he has conducted choral workshops and is an active adjudicator for the Texas Music Adjudicators Association.

Mr. Schober has a Bachelor of Music degree from North Texas State University and a Master of Science degree from East Texas State University. He has been president of the Texas Music Educators Conference, Texas Music Administrators Association, which he was one of the founders, and has served as chairman for various state and national Music Educators National Conference committees.

In his community, he retired as Minister of Music at Oak View Baptist Church and received the Music Ministry Award of Distinction in 2005. He also is a past member of the Irving Arts Board. He was organizer and coordinator of the Irving Centennial Choir in 2003. He was selected to be Irving's High Spirited Citizen in 1988.

He is a current member of the Entertainment Series of Irving Board of Directors. He is a current member and past president of the Irving Noon-Day Lions Club. He sings with the Singing Men of Texas and conducts the Irving Silvertones. His wife, Carol, is a retired teacher and his daughter, Lynn, works at the Irving Independent School District Administration Building. His son, David, and family live in Nashville where he is a recording engineer. In addition to their children, Carol and Woody have five wonderful grandchildren and one great-grandchild. Two of their grandchildren and a son-in-law also work in the Irving Independent School District.