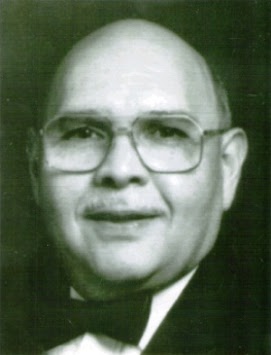 Mr. Pedro “Pete” Cisneros was born in Ozona, Texas on January 28, 1934. His parents were Mr. Reyes Cisneros and Mrs. Chita Cisneros, owners of a local grocery store. Mr. Cisneros attended elementary through high school in this community and excelled as a musician and as an athlete. Pete, as he prefers to be called, became an All-State saxophone player, as well as an All-State football player. This was a remarkable feat, as times were difficult, especially for a young Hispanic male. Mr. Cisneros never allowed this to get in his way, as he would constantly be challenged, and was always trying to be the best that he could be.

Upon graduating from Ozona High School, he proceeded to enter Sol Ross University in Alpine, Texas and pursue a career in music education. Mr. Cisneros played clarinet while attending Sol Ross, and received his bachelor of music education degree. Once he attained his degree, he entered into the United States Army and became a member of the fifth Army Band in San Antonio, Texas. After completing his tour of duty, he accepted a teaching position in the Pharr-San Juan-Alamo School District in the Rio Grande Valley.

Mr. Cisneros moved to the P.S.J.A. School District and became an assistant band director during the 1959-1960 school year. The following year he became the high school band director and devoted a lot of his time in the development of a very strong music program. He was single during these years, and could devote countless hours to his profession, becoming extremely influential to many young musicians. The P.S.J.A. bands earned countless 1st divisions and sweepstakes, as well as placing numerous students in the All-Region, Area, and All-State bands. His bands also represented Region XV as the Region Honor Band in the State Honor Band competitions. Mr. Cisneros became Music Supervisor for P.S.J.A. School District and served in this capacity until his retirement.

Pete was a member of the Rotary Club, TBA, TMEA, and Phi Beta Mu. He served as Region XV band chairman, hosted countless competitions at his school, and continued on to become the President of the Texas Bandmasters Association. These accomplishments demonstrated his professionalism, persistence for excellence, and his quest for always doing his best at all he attempted. These qualities he instilled in his students, staff, and peers.

Today, there are many band directors who were his students and they continue to provide the best possible musical education to their students, just as they received the best at P.S.J.A. High School under Mr. Pete Cisneros. Among these students that are working as educators are Mr. Wilfredo Perez from Edinburg North High School, Mr. Ruben Adame from La Joya High School, and Mr. George Trevino of Lopez High School in Brownsville, Texas. These three gentlemen are consistent representatives of Region XV at the state level in marching and concert competitions.

Mr. Cisneros married his wife Armandina and they still reside in the Rio Grande Valley. Pete is and always will be remembered as one of the “Great Valley Band Directors,” who has earned the respect and admiration of all his students, former staff members, and music educators of the “Great State of Texas.”