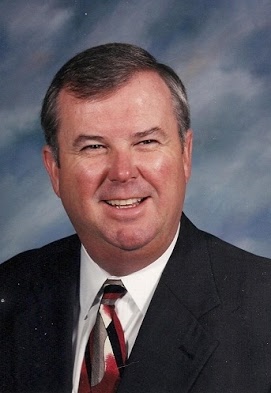 Larry was born in Arkadelphia, Arkansas, to Mary Katherine and Charles Wilson Tucker, in 1950. His younger sister, Phyllis, was born two years later. They grew up on the typical rural farmstead…unpainted house, water well, and a “one-holer” outhouse. Even though times were tough, the family was close, and there was always plenty to eat.The on-site smokehouse always had ham and bacon curing inside, and fresh vegetables from the garden were canned for use year-round. The family milk cow provided milk and butter, chickens laid eggs, and the herd of beef cattle raised on the farm filled the freezer for the family’s use.

Larry learned from an early age that everyone pitched in on a family farm. He learned to drive at about the age of eight on a Farmall Super A tractor. His dad put him on the tractor, gave him some basics, and let him go. Larry promptly ran it into a shallow ditch on the side of the road. In true teaching fashion, his dad got the tractor out of the ditch and headed toward home. After a typical “This won’t happen again, will it?”, Larry was instructed to drive the tractor home, although in its lowest gear and at an idle! Within a few years, it was not uncommon to look out from the family farmhouse at the end of the workday and see Larry, his dad, and his grandfather, all on their own tractors, making their way back from the fields. Even after he married and moved from home, he often would come back in the summer and help his dad get the crop in.

Even though Larry loved life on the farm, it was hard and dirty work. His parents stressed the importance of an education, especially since neither of them completed high school. Larry and Phyllis both went on to earn Masters degrees and Larry did some work toward his Doctorate before his children entered college. Larry and his sister both pursued careers in public Education.

It was the late elementary years that proved to be a pivotal point in Larry’s life. The high school band director, Bill Clark, came to the fifth-grade classrooms and invited all who were interested to come to a meeting in the school cafeteria to learn about joining the band. Larry was intrigued and couldn’t wait to play trumpet in the band. Unfortunately, his family could not afford a trumpet. Dr. Clark was not one to lose a student and started Larry on a King bell-front, three-valve baritone horn playing tuba music from the “Easy Steps to the Band” method book. Of course, when he got to Junior High band, the notation was quite different. That’s when Dr. Clark told Larry it was time to graduate from the “baby tuba.” Thus began the life of a new tuba player for the Arkadelphia band program!

The Arkadelphia High School years were a great time for Larry. He loved the band and the wonderful sounds surrounding him each day in rehearsals. Dr. Clark was an excellent role model and motivator. Larry and Dr. Clark would on occasion go bird hunting together and developed a friendship that has lasted over forty years. Also during that time, it was not uncommon for Dr. Francis McBeth to bring a new manuscript to the AHS band hall for the band to read. That contact spawned a friendship with Dr. McBeth that has led to numerous guest conducting appearances and a commission with Larry’s bands over the years. Also an important event during that time…Larry met his high school sweetheart, Marion, who was eager to accept a ride in Larry’s 1965 red Mustang! After four years of dating, they married and recently celebrated their thirty-ninth wedding anniversary. Their son, Jason, and daughter-in-law, Cyndi, are both successful band directors and daughter, Jennifer Penny, is a middle school gifted education teacher. Son-in-law, Mike Penny, is a graphic designer. Larry and Marion have two granddaughters, Madison and Meredith, who are the apple of “Papaw’s” eye!

Larry was offered a full-scholarship to Henderson State University, where he studied under Wendell Evanson, a former Revelli student. Don Kramer, from the Joliet, IL, band program, and Dr. Dwayne Sagen, now at Vanderbilt University, were all instrumental in developing Larry’s skills and philosophy and have been life-long friends and mentors.

Larry was a mid-term graduate and there were two jobs open in the state at the winter break. He accepted the Lonoke, AR, high school position and was responsible for all band instruction for grades 6-12. Larry learned two valuable lessons during his tenure at Lonoke. First, never chart a full-band, unison rear march. Fortunately, the band got off the field without any injuries! And second, he learned how to promote his program. The band’s uniforms were almost twenty years old, faded, and frayed. To promote new uniforms for the band, he put a sample on a mannequin in the local men’s store and asked for the community to support the effort to raise funds. After those efforts fell short, Larry met with the school board and remembers the superintendent pushing away from the table when the item came up for discussion. When it became obvious the board was going to support the expenditure, the superintendent moved back to the table and offered his support! At the end of the year, Larry had an opportunity to move back into his home region and chose to do so.

Larry was named Director of Bands at Ashdown, AR, high school in 1974. The high school band at that time was class AA, contained grades 8-12, and played off the grade two list. By the time he left seven years later, the band was AAA, contained grades 10-12, and played off the grade four list, consistently making first division ratings. Those were great years and Larry remembers many wonderful students. It was during this time that he hired Travis Smith as Junior High director, which began a more than thirty year friendship. Larry was very active in the First United Methodist Church, leading the chancel choir and the United Methodist Youth Fellowship. In 1981, the opportunity to move to Texas presented itself when Larry was offered the position of Director of Bands at Plano East Senior High. He remembers the interview well because not only did he interview with the committee in Plano, but the committee also came to Arkansas to conduct interviews on site. After meeting with Larry’s principal, superintendent, and having homemade snacks served by Marion at the Tucker home, the committee made the decision to offer the position to Larry. He often says it was Marion’s cooking that sealed the job offer at Plano East!

Plano East was designed for 2200 students but opened with a charter class of about 600. Larry’s first rehearsal with his new AAAAA band had eighteen members! Because the fine arts building had not been completed, the band met in a classroom in the business education department. As it turned out, this was not a bad move since he and his students became endeared to the rest of the building for their daily live entertainment. When the fine arts building was completed in November, the band made the move to the new facility. By the end of the year, he had convinced several former members to rejoin the band and membership was up to twenty-five. Holst, Vaughan Williams, and military band music became staples in the band’s repertoire that first year! While the band did not enter UIL that year, they did compete in the solo-ensemble competition as a medium ensemble performing The Marriage of Figaro.

Larry remembers several great moments during the years at Plano East. First, when the Plano East Panthers first played cross-town rival, the Plano Senior High Wildcats, he made a last-minute change in the halftime show. The band had closed its show at UIL on Tuesday with The Battle Hymn of the Republic. Larry changed the routes for the flag corps and, on Friday night, a United States flag, reaching from 35 to 35 yard lines, was unfurled behind the band. The capacity crowd of more that 15,000 immediately responded with a resounding standing ovation and firmly established the fact that there was a “New Cat in Town, and it was Hungry!” Later that year, after its first UIL sweepstakes awards, the fifty-four members of the band won the Gateway Music Festival in St. Louis. It was a great moment for the members, and they hoisted Larry on their shoulders and carried him off the stage at the awards ceremony. Over the next several years, the Plano East bands went on to make sweepstakes each year, won national invitational contests, and performed at several conventions, including the College Band Directors National Association and National Band Association, the Four States Bandmasters Association, and the ArkLaTex Conductors conference. At one national contest in Orlando, the band arrived at the contest site, at 7:00am, an hour early, only to find no equipment on the stage. He and his students moved equipment from the band hall and began their warm-up late. The judges came in at the assigned time and told him it was time to begin. Larry explained to the judges the situation and asked them to go down the hall and get another cup of coffee. He would send for them when the band was ready. The band went on to win Best in Concert awards for the contest! Larry was offered the opportunity to move to the Director of Performing Arts position at the end of 1989 and was not ready to leave the classroom. Recognizing the fact it might be years before a similar opportunity presented itself again, Larry accepted and made the move to administration.

Larry spent eighteen years in fine arts administration. During that time the directors on the staff and their organizations had numerous appearances at The Midwest Band and Orchestra Clinic, TMEA as Honor groups, the Music Educators National Conference, the Lincoln Center, and the Kennedy Center. Larry’s stated goal as an administrator was to “hire the best, give them what they need to succeed, and then get out of their way!” His office door was always open, unless the visitor closed it on his or her way in. If he had a serious concern about the performance of a staff member, he went to their campus. He strongly believed in the old adage “compliment in public, criticize in private.” Two of his favorite expressions were, “when an old dog barks, pay attention” and “you can’t push a rope, you’ve got to lead it where you want it to go.”

Larry was named Teacher of the Year for Plano East in 1989 and went on to also receive the Ross Perot Excellence in Teaching Award that year. He was named Texas Music Administrators Conference Music Administrator of the Year in 2006. In 2007, he was runner-up for the Arts in Education award for the City of Plano, coming in second to the Plano ISD! He has served as president of the Four States Bandmasters Association, state chairman of the National Band Association, president of Alpha Chapter of Phi Beta Mu, president of the Texas Music Administrators Conference, and president of the Plano West Rotary Club. He served four years on the Cultural Affairs Commission, two as chairman, for the City of Plano. He was a Paul Harris Fellow and recognized by the Plano West Rotary Club as Rotarian of the Year in 2004 and 2006, as well as by the Rotary Foundation for his contributions to the Wheelchairs for Kids efforts for South Africa.