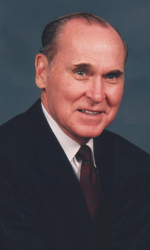 Samuel Ken Howard was born in Tyler, Texas and attended Tyler High School, where he was drum major of the band. During World War II, he served in the U.S. Army for three years in the 100th Infantry Division and at Seventh Army Headquarters, 18 months of which he was stationed in Germany and France.

He received his Bachelor of Arts and Bachelor of Music degrees from Baylor, in 1949 and 1950. He earned a Bachelor of Sacred Music degree from Southwestern Theological Seminary in 1951, and a Master of Science degree from Baylor in 1965. After 15 years as choral director at Waco High School, he became Director of Music Education for the Waco Independent School District in 1964 and then Director of Fine Arts for WISD. He retired from the school system in 1991. During his tenure there he served often as adjudicator for University Interscholastic League Choral and Sight Reading Contests, as well as Solo and Ensemble Contests statewide, and he was a frequent clinician for school and church choral workshops. He also served as the Director of the Methodist Home Title I program for a number of years, and the Director of the WISD Elementary Gifted and Talented Program. Mr. Howard was the coordinator of the Children's Symphony programs, a collaboration of the Baylor Symphony and many area school districts, from 1964 to 1992. For 51 years, he also directed church choirs, serving successively as Minister of Music at Emmanuel Baptist Church, Columbus Avenue Baptist Church, Bellmead First Baptist Church, and Park Lake Drive Baptist Church. After retiring, he attended First Baptist Church.

Mr. Howard was active in state and national professional organizations, holding offices including National Elementary Committee Chairman for the American Choral Directors Association, Vice President of the Texas Choral Directors Association, and Vice President of the Texas Music Educators Association. He served on the Texas State Textbook Committee. Locally, Mr. Howard was a member of the board of directors, and later president of the Waco Civic Chorus; he also served on the boards of the WISD Foundation, the Greater Waco Council for the Arts, and the Central Texas Council for Music Education. In retirement, he was active in the Waco Welcome Corps, the Coalition for Music Education, and the Gideons International. In 1988, Baylor University School of Music awarded him special recognition for distinguished service in music education. In 2001, a group of former high school students and friends established a scholarship at Baylor in his honor, and in 2008, he was honored with the Distinguished Retired Faculty Award by the WISD Education Foundation.