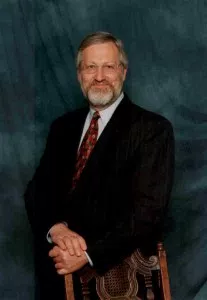 David received his Bachelor of Music Education from University of North Texas and began his teaching career in San Antonio and North East I.S.D. In 1980, he started with Northside I.S.D. after four years of teaching in California for the Ford Foundation. While in California, he studied with Lois Choksy and received his Master of Music Education with a Kodály Emphasis from Holy Names University. His Orff-Schulwerk Certification was obtained at Memphis State University. Westminster Choir College, San Jose State, and UTSA are a few of the places he has had the opportunity of additional training.

David has studied choral music with Dr. Arpad Darazs, Katinka Daniel, Robert Shaw, Sir David Willocks, Dr. Charlene Archibeque, Dr. John Silantien, Roger Melone, Helen Kemp, and others. As a bass/baritone, he has sung with the San Antonio Symphony as a guest soloist, the San Antonio Mastersingers, the Trinity University Chorus, the Falcon Singers and UTSA Choral Ensembles. He continues to learn and teach at each level: children to adults, infants to senior citizens, public school to university classroom, All-District Elementary Honor Choir to the Sanctuary Choir at St. Matthew’s United Methodist Church. He has accompanied singers, choirs, instrumentalists and chamber ensembles on the piano. He has directed festivals, operas, musicals and major choral works with orchestras.

As an educator, David has mentored many young music educators. He has been an officer for the Kodály Educators of Texas. Central Texas Orff Chapter has awarded him Honorary Lifetime Membership for his encouragement of teacher training and development. He is a member of TMEA, TMAC, TCDA, ACDA, CEDFA, OAKE and AOSA.